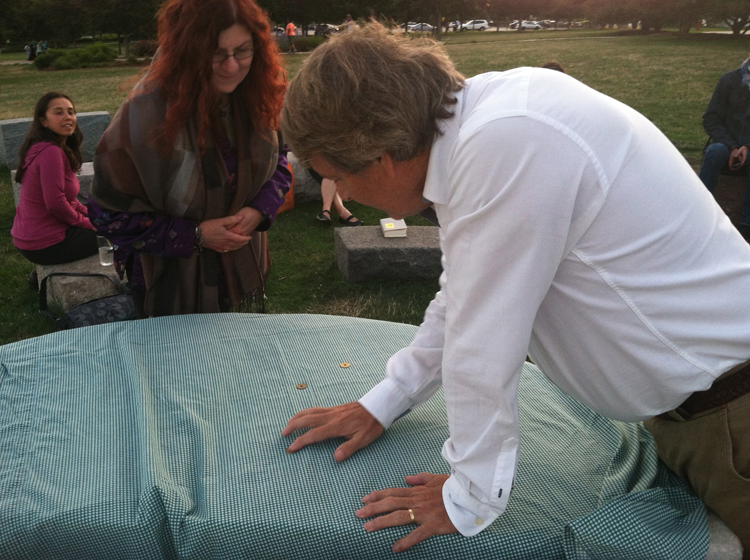 The Chicago summer weather was in full cooperation for Greenheart Transforms’ second annual I Ching Reading and Meditation, Aug. 13, led by Emanuel Kuntzelman. Gathering around the Cosmic Spiral on the grounds southeast of the Adler Planetarium, we enjoyed the beautiful lakeside view and a grounding meditation before consulting the I Ching on how to proceed in these critical times.

Last year’s consultation gave the group quite a serious answer regarding the sense of urgency and the challenge ahead in creating positive change. This year’s reading was one of more joy when the group asked the collective question: ‘How do we focus our energy to be of best service to resolve the critical situation our civilization finds itself?”

Volunteers took turns throwing the coins, and the I Ching revealed the hexagram #58 as the answer:

This was a joyful and gentle answer, and stressed that our energy for moving toward a positive and successful transformation should be with firm and gentle strength. It also stressed the importance of learning from a diverse community.

“The trigram Tui denotes the youngest daughter, it is symbolized by the smiling lake, and its attribute is joyousness…but true joy in this answer, rests on firmness and strength within, manifesting itself outwardly as yielding and gentle.”

“The Joyous. Success. Perseverance is favorable.

The joyful mood is infectious and therefore brings success. But joy must be based on steadfastness if it is not to degenerate into uncontrolled mirth. Truth and strength must dwell in the heart, while gentleness reveals itself in social intercourse. In this way one assumes the right attitude toward God and man and achieves something. Under certain conditions, intimidation without gentleness may achieve something momentarily, but not for all time. When, on the other hand, the hearts of men are won by friendliness, they are led to take all hardships upon themselves willingly, and if need be will not shun death itself, so great is the power of joy over men.”

This image is represented by a lake resting on a lake, and symbolizes the need for accumulating refreshing and vitalizing knowledge. This learning should take place with friends, during discussion and practice and “should be many-sided and take on a cheerful lightness.”

Because the changing line within this hexagram was a #9 in the fifth place during the coin toss, the answer also included the importance of  being aware of disintegrating influences that can endanger the successful outcome of the cause.

With this changing line, Emanuel also shared a second answer within the hexagram symbolized by #54.

This hexagram represents the “marrying maiden” and Emanuel mentioned that this sign usually warns of premature temptation and the need for a tactful reserve. For society to move forward during these critical times, it is important to remain mindful of our outer influences and act with focused intention. We must not be overcome by frivolous or spontaneous moments during a situation, and instead have a clear goal in site.

This image is depicted by thunder over the lake, and symbolizes the potential pitfalls that can occur in relationships and the need to remain mindful to avoid “the reefs that confront the closer relationships of people.” Emanuel analyzed this hexagram to mean that as we work together as a community to create social change, and have our goal within site to persevere with a joyous character when facing challenges that come up along the way.

What are your thoughts on what the I Ching revealed? Share your comments below.