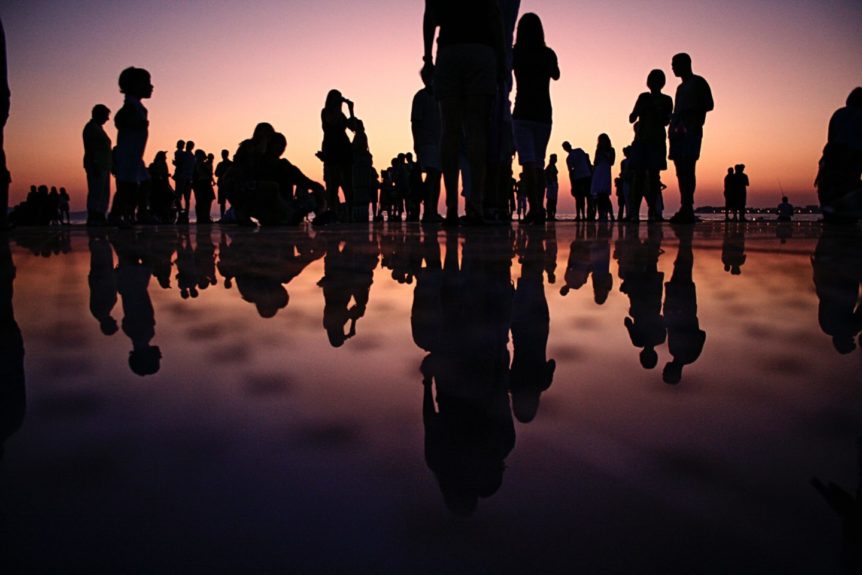 In my previous blog post, I waded into the dangerous waters of cultural values and how our cultural conditioning can often prevent positive global change. While this is a very sensitive subject, I feel passionately about the topic and wanted to further address possible solutions to our current cultural stagnation.

Because cultures have a tendency toward self-preservation, getting bogged down in fear-based and materialistic interpretations of their former, higher essences, it can be difficult to spark transformative shifts in values. This is often due to the fact that we look for solutions within our existing system or social framework, from the perspective of our underlying assumptions conditioned by society. Unless we realize the system is far from perfect, we have a limited context. To create evolutionary change within our many cultural environments often requires a break-out from the group.

We can’t go at this alone. Cultural ties are a powerful factor that bind communities together, for better or for worse, and stepping out on the fringe has always had repercussions. We only need to consider the fate of individuals throughout history, from Galileo and Socrates, to Martin Luther King Jr. and Malala Yousafzai, who all paid the price for questioning the traditionally-held beliefs of a culture. Setting off on your own as a solitary member of an evolving cultural group is daunting and often dangerous. This is why surrounding ourselves with like-minded people willing to embark on this evolutionary journey is critical for our cultural communities to transform.

Author and psychotherapist, Adam Crabtree, discusses cultural groups and their ongoing development in his book on Evolutionary Love and the Ravages of Greed. In his work, he describes two kinds of communities that affect cultural evolution, Natural and Interpretive.

Natural communities are often long-standing, traditional cultures in which most of us have some affiliation. Often, they would have originated as collectives evolving out of the need for group survival. Within any type of natural community, the cultural beliefs have deep roots in traditions and social norms that initially bonded the group and offered support and identity.

Over time, however, the cultural perspective within natural communities can stagnate. Rather than ongoing evolution of the original ideals and values that formed these cultural groups, the agenda morphs into one protecting a rigid definition of cultural identity and self-preservation. This can happen within all communities, governments and civilizations if the cultural conditioning and assigned values upheld by the majority aren’t consistently examined. What originally begin as a set of dynamic ideas supporting the good of the community can become outdated as needs and ideas evolve. In the name of cultural preservation, the populist mentality unfortunately shifts its energy on self-preservation rather than progress. When that happens, it is time for an interpretive community to emerge.

We can trace these emerging interpretive groups in a variety of sectors, and specifically in almost every religion, such as the Protestant Reformation led by Martin Luther and the Methodist revival by John Wesley. Both leaders and their groups of followers were challenging the natural community beliefs of their churches and in turn, created interpretive communities to uphold the ideals that they felt had been lost or were missing in the group culture.

In Western democratic culture, we can find additional examples of evolving cultural values. Just as the civil rights and the woman’s suffrage movements birthed interpretive communities from the early days of U.S. democracy, a new generation of leaders is pushing for ongoing examination of political, environmental and civil rights ideals that define our American culture today.

It’s important to remember that interpretive groups aren’t culturally evolved by default. Members who supported the Fascist ideology, for instance, could be considered an interpretive community– albeit one that challenged the beliefs through a materialistic, racist and fear-based perspective. Forming new communities to jumpstart our cultural evolution doesn’t happen without intention based on higher ideals, and if done so for specific narrow-minded reasons, it will simply lead to further polarization and division. To transform our current global crisis, these interpretive communities must be inspired by renewed values of love, tolerance and cooperation for the good of the whole.

Inspiring a Movement of Interpretive Communities

If we look at this cultural evolution through the lens of my Wave Theory, we can assign stagnate natural communities to the descending side of our evolutionary wave. The cultural conditioning of these groups has resorted to a fear-based, materialistic pursuit of growth that is a dead end for creativity. Telltale signs of stagnation are a swing toward fundamentalist positions and isolationism. I don’t want to speak for the entire planet, but within the culture of the Western industrialized world, it seems we’re getting bogged down in the wave trough and looking to failed structures of the past for solutions instead struggling of forging a new way forward.

To ascend the evolutionary summit, there must be more interpretive communities that value cooperation, compassion, open-source transparency and certainly a group that nurtures an open-minded approach to change. This doesn’t mean a complete disregard of all the values of a natural community, but rather a migrating of the “best hits” from the cultural traditions and fusing these highlights with emerging values. Philosopher and Integral Theorist, Ken Wilbur, describes this approach to evolution as the act of including and transcending. An interpretive community doesn’t reject everything that came before, but rather builds on and improves the principles that continue to matter within our culture.

There has to be a solid foundation to establish an interpretive community that has staying power. We can see how this is critical if we tie in this idea to evolutionary theory and the emergence of new species. When an interpretive species appears, there is no guarantee of survival just because it might be offering a new and improved set of traits. Unless offspring are thriving, the evolutionary traits can’t be passed on and the new species will eventually disappear.

Sustaining the Cultural Values of a New Group of Activists

This is the same within our interpretive communities. In many ways we can see how social activism is currently trying to birth transformed cultural values, while fostering enough strength and cohesiveness for a community to stand together. Support and growth are critical to share the “new traits” of an evolving cultural message.

That is the real challenge. If you foster an interpretive community, you are going to eventually come across opposition. To withstand the obstacles requires a support network in place to encourage ongoing community action and development. Fortunately, this doesn’t mean that you need the masses to launch an interpretive community. It can all start with a small group of friends, committed to a cause inspired by higher purpose.

What’s more, this ability to start with a small but committed network allows pockets of interpretive communities to form and take on very specific projects. Each community doesn’t have to tackle the worldwide crisis. This new sacred activism inspires groups to create positive change at the local level, while creating a ripple effect of transformative momentum.

Being called to address an immediate community need is a great place to start in fostering values of an interpretive community. Little by little, maybe a name emerges for the group, or perhaps you merge with another community passionate about similar cultural ideals. Whatever the project, it’s critical that this new group maintains a vision of ongoing reflection and inquiry into what is driving the interpretive culture, thus it could suffer the same fate as a stagnating natural community. Again and again, these new cultural values must be motivated by a love and connection to the global family. That is the call to action.

Are you inspired to form or find an interpretive community to foster positive change? There are a number of opportunities to learn more about becoming a leader or to participate in groups already heeding the call to action in our cultural evolution.

To take the next steps, I encourage you to explore the Purpose to the People Guide, a handbook for radical transformation, or to attend events and workshops offered by organizations such as ITP International and the Institute of Noetic Sciences (IONS), who are currently heeding the call to action in our cultural evolution.

Do you know of interpretive communities in your area that are doing positive work? Share them in the comments below.