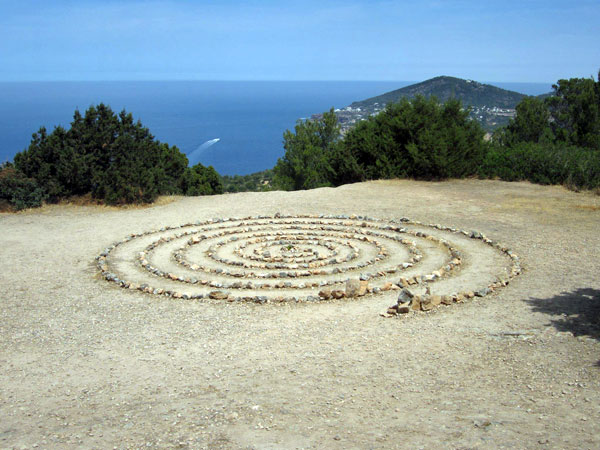 Last month I attended the conference of the Institute of Noetic Sciences (IONS), celebrating their 40th anniversary.  Founded by Edgar Mitchell, an Apollo 14 astronaut who was the sixth person to walk on the moon, IONS remains, four decades after its inception, as the cutting edge organization in the investigation of consciousness.  After his lunar stroll back in 1971, Mitchell was contemplating the jewel of our planet as his spacecraft flew towards earth and something funny happened on his way home:  he had a transcendental experience about the Oneness of life.  So moved was he that Mitchell set up IONS to research where consciousness comes from, how it functions and how we can make it work for the good of humanity.

IONS is a world leader in understanding human potential, and I was enthralled to hear the presentations of such great thinkers and doers as Cassandra Vieten, President and CEO of IONS, Don Miguel Ruiz, Bruce Lipton, Eben Alexander, punk scientist phenomenon Manjir Samanta-Laughton, and many others.  But perhaps the person I was most looking forward to listening to was Peter Russell, a physicist, philosopher and writer who has greatly influenced my thinking for decades.  Back in the 1980s  giving workshops on the transformation of consciousness was a difficult and lonely endeavor that made me extremely grateful to the brave few who were leading the way:  Marilyn Ferguson, Barbara Marx Hubbard, Ken Wilber, Fred Alan Wolf, Fritjof Capra—to name a few.  But when I came across Peter Russell’s The Awakening Earth (published in later editions as “The Global Brain Awakens”) it was like spotting the shore after being lost at sea.

I still have the original copy I bought of that book with the binding breaking, the pages stiff and yellowing and lots of underlined text and notes in the margins.  As an example, the second paragraph of the book reads:  “We shall see that something miraculous may be taking place on this planet.  Humanity could be on the threshold of an evolutionary leap, a leap which could occur in a flash of evolutionary time, and a leap such as occurs only once in a billion years.   And the changes leading to this leap are taking place right before our eyes, or rather right behind them—within our own minds.”

In the 1990s, Mr. Russell similarly came to the rescue with a book entitled The White Hole in Time (published in later editions as “Waking up in Time”).  The subtitle to that book—Finding Inner Peace in Times of Accelerating Change—says it all.  Russell’s writings have been a tremendous source of peace to me while describing the nature of accelerating change.  Thus, it was with a good deal of positive anticipation that I attended a daylong session with Mr. Russell during the pre-conference workshops at IONS.  His session on “The Science of Being:  Exploring the Mysteries of Consciousness” commenced with an hour of introduction to what consciousness might be (“There is no such ‘thing’ as consciousness, with the emphasis on ‘thing’.”)  At that point Peter opened a question and answer session that lasted until nearly the end of the day.

From what I had already heard, a question was burning inside of me, so I asked, “I am getting the impression that you think that the whole of consciousness, the Source, whatever we want to call it, remains constant.  Is that correct?”

“But if everything evolves—the universe, human beings, our consciousness—isn’t it fair to assume that the Primordial Source of Creation also evolves?”

“No,” said Peter.  “Think of it as space.  The use of the space inside this room keeps evolving.  It was once wilderness, then it was perhaps the site of a Native American ceremony, then walls were built around it and it became a conference room.  Everything is changing inside, but the space is still the same.  So it is with the source of consciousness.”

“But space is  a material dimension,” I countered.  “It doesn’t change, but the pure essence of what is going on in that space surely grows and becomes more meaningful as a result of what is happening within and therefore the whole grows as well.”

“Not necessarily,” he replied, “because that would mean giving form to the formless. “

Our dialogue on the subject was to continue over the next few days, as my wife Laura and I coincided with Peter on several occasions:  rounding a corner, at the general session, and finally at a cocktail reception the last night.  As I approached Peter on that evening I could almost hear him thinking, “Oh no, it’s the Greenheart guy pursuing me again with his question about where the source of consciousness evolves.”  And sure enough, I asked him about it again.

“I’ve spent some time with Michael Murphy lately, and he’s really excited about evolutionary panentheism—how the nature of consciousness is both immanent and transcendent,” I said, ready to continue.

“Yes, I am very interested in evolutionary panentheism as well,” said Peter.  “And the fact that it is also transcendent means that it already has the perfect essence as part of its nature.  You cannot transcend the transcendent.”

“But the Transcendent, the Source, the Field—whatever we care to call it– has to evolve, or why else are we here?”  I both proclaimed and asked, almost with a sense of desperation.

“Why is this so important to you?”  Inquired Peter with his sage-like calm.

“Because for me it’s the biggest question there is.  Does all this evolve?  If it doesn’t, then is it simply the play of Lila, going round and round until we know that it’s all just a delusional game, going nowhere except back to the same, constant source?  What, then, could possibly be the purpose of life?”

“But…” I started to protest, but just then Cassandra Vieten asked for everyone’s attention to introduce Don Miguel Ruiz, and asked him to give a short welcome.

In his inimitable manner of grace, kindness and love, Don Miguel began with this:  “Good evening, everyone, and thank you for sharing this moment of joy, for the purpose of life is to enjoy it.”

Peter Russell gave me a knowing glance and our conversation came to a close as we listened to what else Don Miguel had to say.

Still for me, this great question remains:  does the Source itself evolve as a result of our own participation in the mystery of consciousness?  It is, of course, the most abstract of debates, the answer to which may never be known.  Still, I feel the need to formulate an opinion, even if I am in danger of giving form to the formless.  After all, does the divine essence that gave birth to this process—“God,” if you will—become more godlike as a result of our participation in the enjoyment of life?