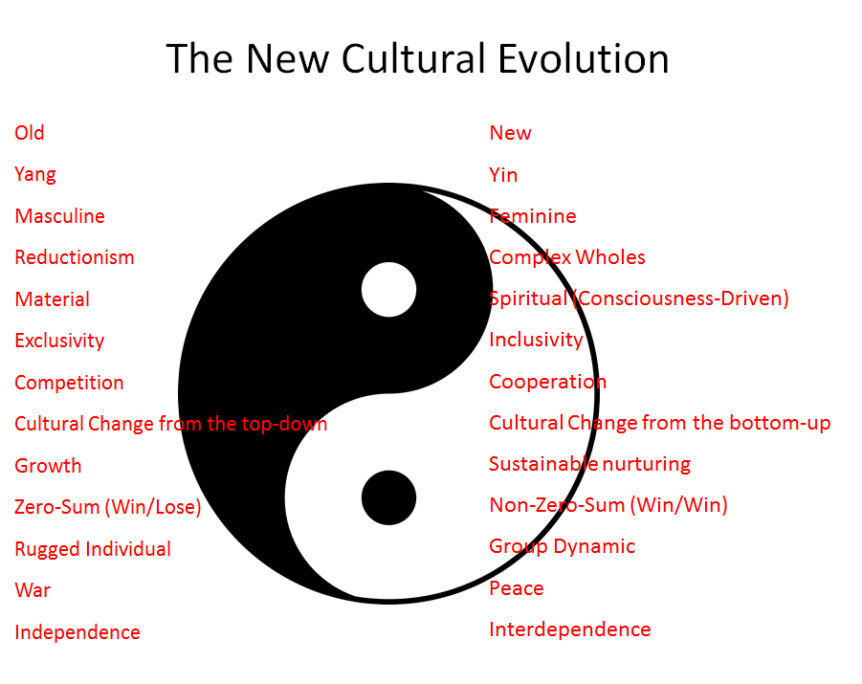 Whatever happened to the social revolution of the 1960s?  Or the Occupy movement?  Or the Arab spring?  Or just about any other potentially transformational shift in society?  To a certain extent, some of the positive energy was dissipated before it could find staying power because these movements were prone to falling back into one of the traditional concepts that is most in need of transforming:  exclusivity.  From early on in our cultural conditioning we are taught to exclude those people and ideas that represent ideologies that are different from our own.  As an antiquated remnant of early human survival instincts, we are trained to think that those who think differently are adversaries.  There is a right and wrong way to do things and, of course, this means that our own group—family, click, clan or country—is right and everyone outside that defined circle is not so right, and maybe downright wrong.

Yet, I think most of us would agree that life is not quite so simple, not nearly as defined as good and evil.  In fact, a lot of people we perceive as enemies might never have become so if we had not circled the wagons around our own group and left them outside of it.  The moment we exclude someone from our collective is the time that they are launched as an adversary.  Once we have kicked somebody out of our home, it becomes difficult to invite them back in.  After being rejected it is hard for anyone to want to become a member of the group that originally excluded them.  And so, movements, social transformations, no matter how noble, how large and promising, usually fizzle out because they become exclusive.

A few weeks back I was talking with Dr. Cassandra Vieten, CEO and President of the Institute of Noetic Sciences when she was in Chicago to speak at Envisioning a World Transformed.  She asked me what the theme would be for Envisioning, and I explained that I wanted to emphasize that the transformative shift must be seen as two sides of the same coin:  a different view, but nothing totally new.  The yin/yang symbol shows supposedly polar opposites swirling together, with a pocket of each inside the other.  Likewise, the great change we are living through right now has to be seen from an inclusive perspective, rather than something that is the new right way instead of the old wrong way.  As competition becomes more compassionate, it doesn’t mean that we abandon the competitive spirit, but rather that we learn to use competition as a motivation to find more compassion.  Likewise the industrial growth era is not to be seen as some horrible, polluting machine that needs to be dumped in the junkyard.  If we begin to focus on long term sustainability with an equitable sharing of resources, instead of growth for growth’s sake, we will be much more likely to actually maintain the appropriate amount of growth to feed, house and service all of humanity without destroying our planet in the process.  And, finally, can we move from exclusivity to inclusion?

Cassandra certainly felt we need to do so, and reminded me of the concept of radical inclusion.  We need to expand our sphere of acceptance and include as many people as possible in whatever transformative practice we are engaging.  But that is easier said than done.  Are we ready to give space in our lives to those who are on the other side of the spectrum from our own spiritual, political and social stances?  Perhaps the keyword in that question is “stance.”  Instead of always trying to stand for something, the transformative shift needs us to flow with everything.  We must try to understand that our own ideas, no matter how dear to us, are thoughts in motion, growing to the degree that we can include a wide reach of alternative concepts.  Evolution never abandons or rejects the work done in the past; it includes and then transcends what it has already accomplished.  Likewise, movements spawned in the transformative shift, if they are going to avoid the pitfalls of the past, must accept and include the old and traditional.

I saw this concept on stage last month at Greenheart Transforms’ “Envisioning a World Transformed.”  Amy Coffman Phillips told us how biomimicry teaches us that imitating nature is the best way to move forward.  Victor Saad explained that putting conventional education into an experiential mode makes us learn more quickly.  Dr. Vieten showed us that science, in its most rigorous sense, when applied to cutting edge research, demonstrates that the latent powers of consciousness are real and can be verified with scientific experiments.  So many change-makers are helping us move towards transformation by including the past and building upon it.  It is a refreshing new perspective on ancient wisdom.

This month, Greenheart Transforms will take inclusion a step further by sponsoring a summit meeting in Sedona, AZ of transformative organizations coming together to discuss our common ground.  In this new era of higher consciousness and broader understanding, can like-minded groups work harmoniously to include others (at the possible cost of compromising a cherished notion?) and form an ever greater whole that evolves through natural inclusion?

Stay tuned for further thoughts.   Or, better yet, send us your own thoughts on how to expand our field of influence by including those who were formerly considered to be outsiders.