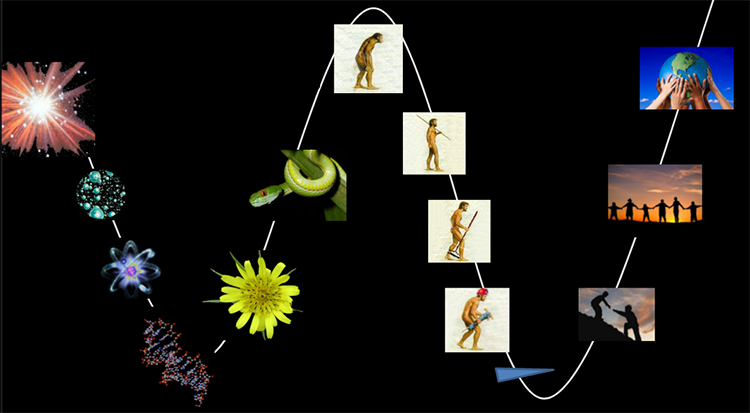 As I continue work on my book, “Riding the Evolutionary Wave,” one of my goals is to explain the Wave Model Theory and how it applies to this critical time in our lives. The more I write, the more I want to focus on bridging science and spirituality and emphasize a farther-reaching understanding of where they meet.

To keep me motivated in this effort, I’ve been re-reading two books, “Evolutionaries” by Carter Phipps and “Conscious Evolution” by Barbara Marx Hubbard, and it has proven to be an interesting project. Reading pages from each book in one sitting, I was excited to see how well the thoughts of these great thinkers flow together.

The two authors are inspiring me to ask key questions regarding how evolution works; does it take leaps or does it meander? Are we really progressing? Have we digressed or are we improving culturally? Are we less aggressive now than we were in the past, or have we become more violent?

I think both Carter Phipps and Barbara Marx Hubbard would say we are progressing. Many people are becoming cynical regarding the efforts for world peace and conscious evolution when all we see in the media are stories about wars, famine, pollution, and disaster. With this bleak outlook portrayed to us in the news, I feel it’s important to emphasize that we are advancing, and in many ways, very quickly.

Our Evolutionary Process as a Wave

The rate of evolution is accelerating, and we are the technology of our own evolution. The more we can understand how our evolutionary process works, the quicker we can solve the problems plaguing the world today.

The first step in this understanding is visualizing this process as a wave. There are intervals with troughs and crests, and therefore evolution is discontinuous rather than an ongoing and upward linear progression. This does not mean, however, that evolution meanders aimlessly.

When we experience a blocked interval in our evolutionary wave, we are given the chance to discover new creative solutions to overcome a crisis. These temporary blocks offer an answer to why evolution seems to get bogged down or move backwards. This isn’t a linear flow but a wave function. Sometimes it takes a crisis to foster new order in our systems.

Within this evolutionary wave are two different types of “leaps.” There are those that move through troughs, and those that ascend the crest of the wave. To differentiate between the two we’ll first look at our current challenge of leaping over our wave trough of materialism.

A successful breakthrough of our current predicament will initially require a more structural, mechanistic solution that is followed by an ascendant progression along our evolutionary wave. There is an abundance of psychic energy following this type of leap, and that is why I’m optimistic about our ability to successfully cross this trough despite the current global crisis.

It’s hard to stamp out the flow of life, and the forthcoming transformation contains many similarities to the appearance of life on earth. There is a deep-seeded desire to thrive and evolve, and when our evolutionary wave reaches this turning point, important new powers in our evolution will come to fruition.

On the other side is progression toward the crest of the wave. This is the second type of evolutionary leap we make when we miraculously arrive at the summit of our journey. This is where we see the appearance of homo sapiens and the dawn of human consciousness, and I believe that once we move through the immediate challenges, we will then be on our way to a second coming of consciousness in the next phase of our evolution.

With both of these leaps, no matter if it is through the trough or crest of our evolutionary wave, shifts occur. If we are moving through the trough, we are making a sort of spiritual, conscious ascent toward the peak of our wave. When we leap through the crest of the wave, we begin our shift toward material reality. It is the ebb and flow of our journey, dotted with the corresponding leaps in our evolution. This is the flow of cultural change. May we ride it safely to a more promising future.

How do you visualize this evolutionary process? Share your thoughts below.