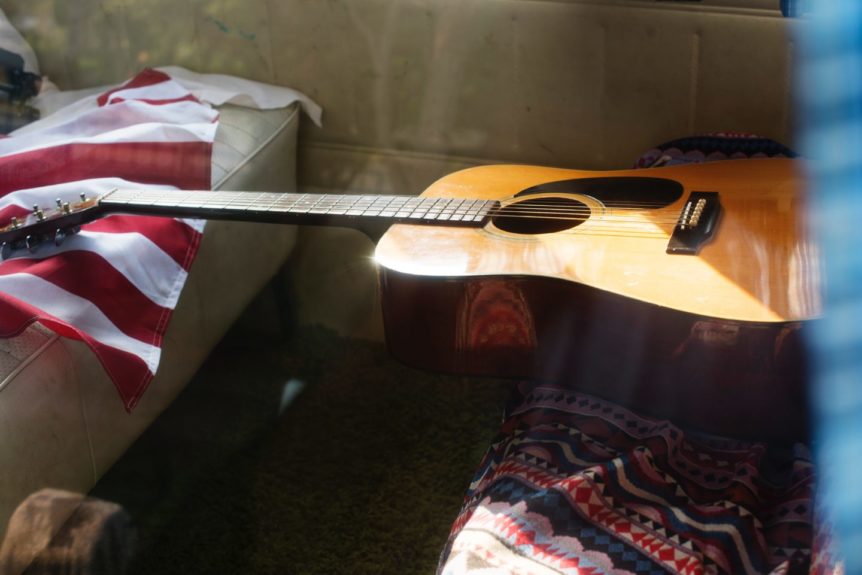 Back in the day, before people told me that my voice and guitar were not really good enough to subject to the general public, I used to sing and strum a few chords, often around a campfire, performing slightly off key. I liked to play the blues, because it helped me express emotions which I didn’t quite understand. At that time, it was mostly concerned with the futility of a war in Vietnam. Today, it has more to do with the triumph of knee-jerk emotion over compassionate understanding. One of my favorite songs to play was an old Bob Dylan tune called “Meet Me in the Morning,” where one line in particular stood out to me:

“They say that the darkest hour comes right before the dawn…”

Those words and their rhythmic flow stayed with me through the years as a reminder that everything moves in cycles, and that a new dawn, no matter how dark the moment seems, is sure to come.

Me, back in my younger days, playing the guitar and myself and my brother, Ken in the 1970s.

In the nearly half century since Dylan first sang the blues, I wonder if we have learned anything or whether, as we approach the Great Transition, if we are still utilizing outdated value structures to deal with an increasingly complex world. Whether it is Brexit, the electoral college, an Italian referendum, or fundamentalist religion, we seem to be turning our backs on the challenges we face, returning to models of behavior founded on fear and an insatiable appetite for material wealth.

Complacency in the midst of this transition is almost as dangerous as returning to antiquated ways of thinking. Fortunately, we have examples of cooperation and compassion proving to be successful in times of unrest, and need to look no further than the natural world around us. Nature, time and time again, often appears to do a better job of handling crises than the human brain.

Nobel Prize-winning chemist Ilya Prigogine, demonstrated decades ago that when molecular systems are pushed far from equilibrium, they are capable of re-organizing in seemingly miraculous ways to secure their own survival. Bees, when driven from their home, will cooperate as a collective unit to find a new hive. When one is located, the bees communicate in progressive unison so that they can all arrive simultaneously to their new destination. Schools of fish, flocks of birds and colonies of termites all show us how to work in harmony and move in ways that benefit the good of the whole.

Why then do humans, with all of our brainpower, sometimes find it difficult to overcome our immediate, individual concerns and take a more compassionate view towards our fellow citizens? Can we justify denying women and minorities equal opportunity, or showing disrespect for the disabled and the underserved, just because we are frustrated with our own lot in life? Perhaps some of our anger arises because we never took the time to sing the blues and process some of those pent up emotions. Maybe we should allow ourselves more space to let right-brained creativity flow forth and sooth our troubled souls.

As it is, our left-brained logic screams out with reactionary fervor to fight fire with fire, to identify enemies and annihilate them with no concessions, no dialogue. Centuries of social models based on materialistic greed weigh on us, urging us to grab our share of the remaining spoils of dwindling natural resources before they are all gone. We have been duped and conditioned by reductionist science to believe we live in a meaningless universe that brought us here by some material accident. We have been fooled by Social Darwinism to assume this is one big struggle for survival.

We can take some solace in chaos theory. Just as everything appears to be breaking down and dissolving into chaos, is when the seeds of transformation are planted.   The behavior of complex systems—and there is none more complex than human society—is highly sensitive to slight changes in conditions, so that small alterations can give rise to strikingly great consequences. That is when a fractal attractor emerges, offering us the role model around which we can rally with our support for a new and transformed system. All of us, in our individual ways, need to step up and play that role. We need to be the type of leaders we would like to see.

It will take some time, however, and meanwhile many of us are still lost in the swirl of chaos, wondering how much worse things will become before they get better. It kind of makes us want to sing the blues:

“Well, they say that the darkest hour comes right before the dawn. But it’s never been so dark since you’ve been gone.”

Like our lament for a lost love, we miss the light of human decency. We know in our hearts that we are better than this– that the ideals of democracy and the respect for human rights still glow within us and will shine again. All over the world, people are regrouping with renewed determination, re-organizing with re-energized passion and purpose, to stand up for our rights to love, to share, to find cooperative solutions to our problems from the best part of our being. In this gloomy time, with the most somber shadows of our society looming so large, is when the kernel of transformative hope springs to life. It might seem like our darkest hour, but the song in our hearts nourishes the knowledge that a brighter day is on the way.