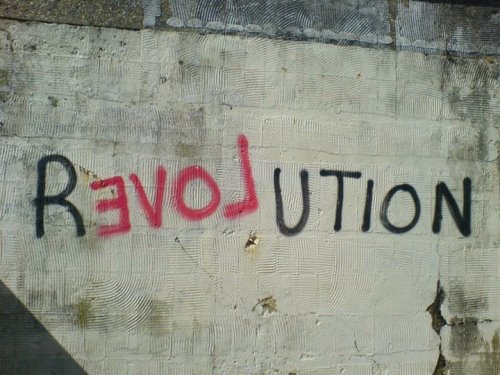 Back in November, I had the good fortune to attend a workshop with Adam Crabtree, the author of Trance Zero, From Mesmer to Freud and a highly respected psychotherapist.   Adam spoke to us about the powers of trance, and in conjunction with author Michael Murphy, explored techniques of “subliminal engagement”—how to get in touch with the vast resources outside of our normal consciousness.  We all have our own ways of doing so, but one of the common themes we find as a source of inspiration below the surface of the thinking mind is evolutionary love.

Dr. Crabtree explained, in what can only be described as loving detail, that American philosopher Charles Sanders Pierce was one of the pioneers in discussing love as the driving force of evolution.    Coining the term “evolutionary love,” Pierce was quite the philosopher, but died largely unrecognized in his time, due in part to his rather difficult personality.

Pierce was also one of the first proponents of Process Theory, believing that everything is becoming more of what it is, and that the laws of nature come from evolution.  While he died in poverty, writers and philosophers of the stature of William James, Alfred North Whitehead and Karl Popper considered him to be one of the greatest American philosophers.  He was the founder of semiotics and a great logician, but what interests me the most was how he understood the process of evolution and that he was bold enough to postulate that the seemingly fixed laws of our universe are more like habits.

I’ve always been a big fan of Rupert Sheldrake, and Pierce’s reference to these evolutionary habits offers a precursor to Sheldrake’s theory of a morphogenetic field. I believe the morphogenetic fields are evolving out of the habits that we form, and the more enduring habits are the ones that are motivated by love.  And according to Pierce; “Evolutionary love is that which wants you to realize the full potential of your love.”

He felt that there was a strong innate love and altruistic feeling in human consciousness, and that love was constant, nurturing and caring. Much like taking care of flowers in the garden, we can’t tell the flowers what to become, but we nourish them to come into their own full bloom. Pierce looked at this love as a supportive will for other people to evolve.

One of the important aspects of evolutionary love is that it is a strong statement against cynicism, separateness and the rugged individualism that are so prevalent in society today. Americans, probably more than any culture, have this “every man for themselves” mentality as we have been raised in a materialistic society. We become what we think and the nature of our relationships, or lack thereof, come about because of our philosophical viewpoints. So if we think we are all separate selves struggling against each other and fighting for limited resources, that is our reality. But if the driving growth of evolution is the force of love, and we apply that to our intentions and our visions, life becomes a much different playing field.

Evolutionary love fits very well with another philosophy called panentheism. Michael Murphy, a leader in the human potential movement, is enthusiastically discussing the merits of evolutionary panentheism as the cosmology that is most suited to 21st century spiritual thought. In panentheism the key idea is that all is in God. There is this transcendent quality to the wholeness that is more than the sum of its parts. When we get a very complex system, it develops qualities beyond the mechanics of the inner systems and can even transform itself into a new entity with transformative qualities.

If the driving force for growth is caring and nurturing love, that in itself generates something more than the parts of the whole. As we love others, we develop our own self, not from an ego based motivation but from a positive feedback loop initiated by the act of loving.

Based on the innate altruism of the human psyche, we love the whole because that is the driving force for positive change, but as a result of doing this we grow and in turn receive love and gratitude.  This evolutionary love feeds off itself and builds as we put it out there in the universe.  By loving others we discover more of our own true nature and evolve into higher beings.  This is the philosophy that was begun by the German idealists, got energy from the American transcendentalists, was formulated by Pierce and is now being brought to our attention by Michael Murphy and Adam Crabtree.  Greenheart Transforms events, such as the Envisioneers on April 11 and the “Leadership Transformed” retreat in May, are designed to overcome social discord and facilitate an environment in which the logic and beauty of evolutionary love will thrive.   I hope to see you out their sharing, and benefiting from the cross-fertilization of evolutionary love as it drives us towards the altruistic habits of the human psyche.