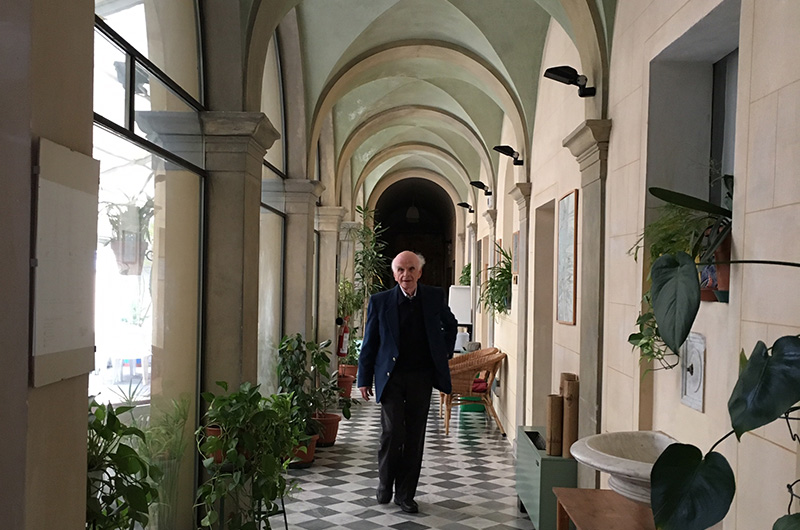 In February, I had the honor of spending a few days in Tuscany with Ervin Laszlo, a Hungarian philosopher of science, systems theorist and two-time Nobel Peace Prize nominee. Not only was this meeting an exciting opportunity to meet with one of the top intellectuals of our time, it was a personal milestone having been greatly influenced by his work in my own spiritual search throughout the years.

As an avid reader of many of his books and familiar with his philosophy as an integral theorist that I greatly respected, I expected it to be an intellectually charged couple of days. What I hadn’t expected, however, was the warm welcome and immediate friendship that would develop with this kind and kindred spirit.

Everything about the meeting with Ervin and his team hinted at a destiny in play. My wife, Laura, who joined me on the trip, said, “Twenty-five years ago, when I first fell in love with Emanuel and his determination in the spiritual search, the first person he mentioned was Ervin Laszlo. I knew some day the two of them would meet.” Throughout our time together, we found our views on this magnificent universe quite complimentary. It was inspiring to share the same fundamental idea that the materialistic paradigm is not the answer. Consciousness is primary and creates everything else. Therefore, the universe is a creative one.

What a wonderful thing, to find a common view on the connectedness of all things. It’s this perspective of mutual resonance that motivates me in my own work time and time again. In the ongoing efforts of our Global Purpose Movement it is this common ground and connection that so frequently arises.

This coherence is also an important component within my personal Wave Theory. Everything exists as a wave, and so all exists as an interconnected whole. My ideas and Ervin’s could be waves in the same sea, stored in the information of the Akashic Field.

Our many discussions together also re-confirmed by personal beliefs on the integral role Karma plays in the evolution of consciousness. With each new incarnation—each new life – our consciousness continues to evolve. His ideas about karma bring it into scientific legitimacy. It is what connects us to each of our lives; we do live multiple lives, and we are affected by each of our deeds.

This was just one of many illuminating topics I was able to discuss with Ervin, but perhaps the most enlightening exchange happened on our final night in Tuscany. Enjoying a delicious Italian dinner we lively conversed on the nature of Source and how it evolves. Toward the end of the meal I posed the philosophical question, “Does the Source become more divine-like as the universe evolves?”

Ervin started off reluctant to say that “God evolved,” but I pressed the notion further. If the overall nature of the universe is evolving, and we have the evolutionary drive, why should it be any different in that the Divine Source wouldn’t evolve itself as well?

With a crackling fire in the background, Ervin finally offered the answer, “I don’t know.”

However, just a few short weeks later, after pondering this important question, his own answer has evolved. Ervin acknowledges that it is certainly worth considering the idea that the Source could evolve as a result of our ongoing evolution. Maybe that is the purpose for the creation of our universe.

In these exciting times, it’s the ultimate quest of our nature to continue asking the big questions. Like the Divine becoming evermore divine-like, we’re all on this transformative path together moving toward higher states of consciousness within a global movement.

What are your thoughts on the evolution of the Divine Source? Share your comments below.