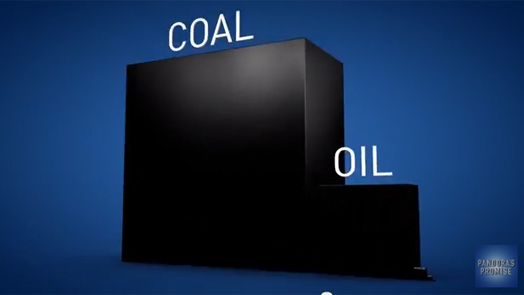 Okay all you ardent environmentalists, it’s time to rally to the cause and support nuclear energy, right?

That’s what I thought as the opening scenes of the documentary “Pandora’s Promise” began presenting its message:  we need nuclear to ward off the environmental crisis.  It’s a big shift in thinking to swallow, but the transformative process often requires such a reversal of assumptions, and as I listened to the facts, I began to sympathize with the thesis.

But were the points presented in this thought-provoking documentary correct? And is nuclear power really the answer to saving the planet? A recent article in the July 8, 2013 issue of The Nation shared my interest in Pandora’s Promise and took a closer look at the “facts” presented. Writer and activist, Terry Tempest Williams and The Nation’s environment correspondent, Mark Hertsgaard, had an open dialogue on their views about embracing nuclear power. What they discussed in the article “Can Nuclear Power Save the Planet” gave a much bleaker view than the rally cry found in the movie.

The film creates a sense of urgency of time running out, that we are clearly not getting away from our dependence on the fossil fuels that are choking us, and we don’t have time to wait for alternatives.  Wind and solar can’t keep up with growing energy needs, and other alternatives are agonizingly slow in development.  The solution: good old, clean, nuclear, which by a few environmental standards, is the best alternative to fossil fuels.

What the film fails to account for, according to Hertsgaard, is the current success of these nonnuclear alternatives. In 2013, wind and solar power are making a growing impact as sources of electricity, and Germany, which has the fourth-largest economy, is making a surge to eliminate use of nuclear or fossil fuels completely. This is hardly the picture of stalled development the film labels nonnuclear energy options.

Are we looking for reasons to dismiss nuclear power? After all, when most of us think of nuclear, we think of bombs. The film states multiple examples of how nuclear energy has gotten a bad reputation. It is a striking example of a transformative reversal.  Having grown up in the cold war with the threat of nuclear holocaust hanging over civilization, I find it almost astonishing to hear in the film that those nasty Russian atomic weapons can be recycled to provide the United States with 10% of its electrical needs, and is perfectly safe.

Pandora’s Promise argues that there were no deaths from radioactivity since the Fukoshima incident in 2011, and that there were only 56 nuclear-related deaths at Chernobyl. Williams points out though that “My first complaint is the one lodged within my own cells and the cells of my family members, now buried: it’s too damn early to tell. Cancer from radiation exposure usually takes time to present itself.”

Interesting enough, The UN International Atomic Energy Agency, an organization that promotes nuclear power, shared a study that found thousands of cancer deaths related to radiation from Chernobyl and possibly more to be diagnosed in the future. This hardly sounds like the public’s outcry for the safety concerns of nuclear power are unfounded.

What if we are kidding ourselves that nuclear is the only option for a quick fix? Data collected by McKinsey & Company, one of the worlds’ foremost management consulting firms, presents the argument that the most efficient and cost-effective solution is to focus on energy efficiency. Hertsgaard reminds us that going nuclear is not only the slowest path to rid our dependency of fossil fuels, but the costliest. Focusing on improving energy efficiency is seven times more effective in reducing greenhouse gas emissions than nuclear power.

The debate continues through the article on myth versus fact presented in Pandora’s Promise. As our global community continues to seek out cleaner forms of energy, it is important to keep an open mind in finding solutions to this climate crisis. Williams makes a wonderful point on how we approach these challenging times.

“For me, this film’s strength was not that it changed my mind, which it did not, but that it expanded it. I am interested in having an open conversation about nuclear energy. We know we must wean ourselves off fossil fuels. So what are the alternatives? Are renewable energy sources enough for the energy-poor around the world?”

Check out this documentary. Do you think that nuclear is the future of our energy needs? Share your thoughts below.