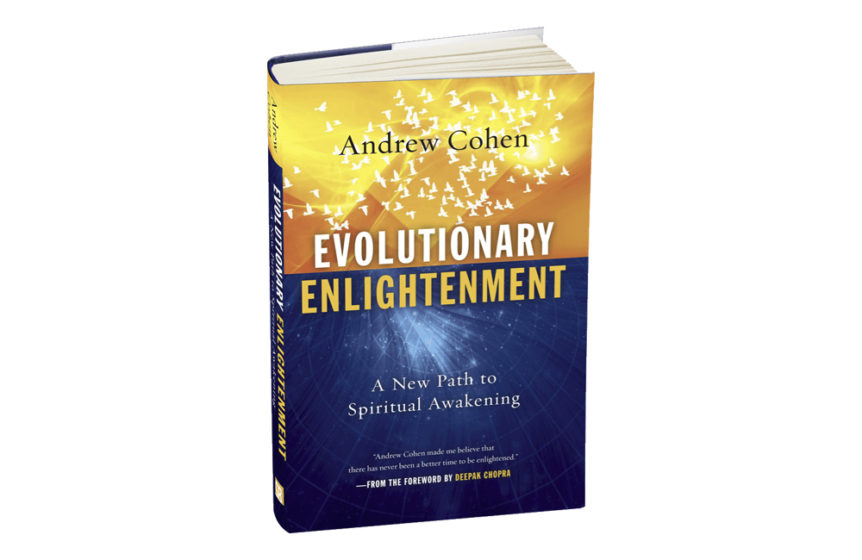 I have noticed that the mere mention of Andrew Cohen’s name sometimes brings a reaction of disapproval from people who are well-versed in the human potential movement.  One of the reasons is probably because Cohen is a self-proclaimed guru and gurus are oh so sixties.  Gurus aside, another possible reason is, to be honest, that the truth can hurt.  In his teachings, Cohen is rather ruthless about asking us to move beyond our petty concerns with our egos and give it all up for the quest for the Authentic Self.  As he says in his latest book, Evolutionary Enlightenment, when we think about the fourteen billion years of hard work to get us to where we are now, “it might even begin to strike you as immoral to spend too much time sitting around and worrying about the fears and desires of your personal ego.”

Do we really want to be told that there is a new moral imperative asking us to follow the evolutionary impulse?  Who is Cohen to accuse us of being absorbed in postmodern exaggerated self-importance?  Do we want to hear statements like this?:  “You start out on the spiritual path thinking, ‘I want liberation for myself… But sooner or later, it is glaringly obvious that there is something infinitely bigger than your own personal spiritual aspirations that is calling you.  It’s no longer ‘I want that’ but rather, “That wants me. ‘

To make matters more complicated, Cohen takes issue with some of our most sacred traditions.  A few years ago I attended one of his workshops and he talked about “slaying sacred cows,” and took aim at some of our most cherished cultural assumptions.  Although he doesn’t use that term in this book, he nevertheless maintains the assault.  For example:

From Ram Das in the 60s telling us to “Be Here Now” to Eckhart Tolle’s “The Power of Now,” it is widely accepted that one of the keys to spiritual evolution is to simply be fully present.  Cohen expresses a contrary opinion:  “In an evolutionary context you discover that the present isn’t where the action is.  The action is in the future, because the future is something that you can get involved in creating.”

The author also questions the widespread belief that our material world is not a good place, that life is suffering for the Buddhists, or that in a Christian context we are sinners in a world of temptation.  Writes Cohen:  “When the goal of a spiritual path is to escape from this world, the implicit message is that being here is not a good thing.  Many of the great traditions, and many of today’s spiritual seekers, still have this otherworldly bias, which by implication means that this world is not it.” Cohen feels that this world is definitely the place to be and act, describing our material life as an “overwhelming goodness…that underlies everything, a fundamental positivity that is almost impossible for the human mind to comprehend.”

No wonder Cohen has his share of critics.  He is overturning some cherished traditions with Evolutionary Enlightenment.  His ideas may not resonate with the traditionalists, or with some mainstream modern spiritual thinkers, but his philosophical views often echo my own.

This book also offers some practical guidance beyond mere spiritual philosophy.  In the Foreword, Deepak Chopra has this to say:  “After brilliantly unraveling the nature of duality and how it has captivated us, this book prescribes a cure for the divided self.  I was particularly attracted to the five chapter headings that describe the Tenets of Evolutionary Enlightenment:  Clarity of Intention; The Power of Volition; Face Everything and Avoid Nothing; The Process Perspective; Cosmic Conscience.”

Those chapter titles alone give us some good clues as to how to move forward with this new kind of enlightenment.  The one that had the most impact on me was the Process Perspective.  Here Cohen encourages us to see the big picture.  The best way to get over our little individual ego concerns is to see ourselves as part of the 14 billion year process of evolution, which was designed precisely so our thinking minds at this moment of time could figure out that it is our duty to be a creative part of that same evolution.  This impersonal perspective gives us the large vision.  Says Cohen:  “it’s as if you become the whole process looking at a very small part of itself, rather than that small part beholding the entire process from afar.  It’s like seeing everything that occurs from the outside in, as opposed to from the inside out.”

Learning to look at the daily challenges of life from the outside in can have a dramatic and liberating effect.  I certainly don’t think of Cohen as a guru and admit that he occasionally ruffles my feathers too, but I do recommend this readable book to anyone seeking spiritual understanding in this time of transformation.  As for the traditionalists, for the postmodernists suffering from an overdose of indulgence, and anyone else who might feel offended by Cohen’s bold vision, I would say they should read it without fail.

Have you read Evolutionary Enlightenment? What were your thoughts on the book and its message?