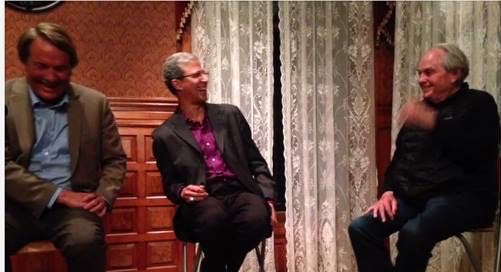 On March 11, as part of an ongoing series at Falkirk Cultural Center in San Rafael, CA, ITP International hosted an exciting conversation between their co-founder and human potential movement leader, Michael Murphy, and Tim Boyd, International President of the Theosophical Society. I was honored to be the moderator on the discussion between these two titans of spiritual thought for the evening’s event.

Murphy is the Co-Founder of Esalen Institute in Big Sur, which has served as the cutting edge venue for the human potential movement since 1962. He has also authored many books, including The Life We Are Given, The Future of the Body, and Golf in the Kingdom, which has become the best-selling book on golf ever written. Boyd is the first person to simultaneously hold the positions as both International President and President of the Theosophical Society of America, which is quite a distinction in this storied organization that dates back to 1875.

This inspiring conversation evolved as the result of a process that began in November 2013, when I organized a meeting of transformative leaders in Sedona, AZ including ITP International, the Theosophical Society, the Institute of Noetic Sciences (IONS), and Greenheart International, among others. The goal was to explore ways in which leading organizations in the human potential movement could share resources and ideas, hopefully finding a synergistic common ground that would amplify all of our work.

The gathering in Sedona was a success on many levels, but to work closely with prestigious organizations such as the these, sometimes a more intimate dialogue needs to unfold. Collaboration requires understanding, and when Michael Murphy agreed to an evening event with Tim Boyd discussing their individual views on science and spirit I was certain it would be an unforgettable encounter.

Along with their many years of experience and vast stores of accumulated wisdom, Michael and Tim are both master storytellers. As moderator for the standing room only event, my main job was to politely guide the conversation without cramping their captivating styles. Fortunately for me, both of these gentlemen were at their best, utilizing Murphy’s well-known term of being “in the zone” while realizing expanded capacities, which in this case meant eloquently expressing deep spiritual concepts in a way that could be readily comprehended and absorbed by the audience.

The conversation shifted into high gear when they spoke about some of their life-changing moments: those special epiphanies that set them on the path of spiritual seeking. The audience was given a chance to share their own “aha” moments with a neighbor, and the room buzzed with the excitement of these transformational moments.

Alas, we only had two hours for Tim and Michael to tell their personal anecdotes, but I dare say that my original hunch was correct. The two of them hit it off in a delightful dance of spiritual philosophy and story-telling, and expressed their wish to continue the conversation in the future. It was an honor to be a small part of this historic evening filled with meaningful conversation and surrounded by like-minded community. I look forward to the next opportunity for dialogue in the near future.

To listen to the audio from the evening, check out ITP Internationals podcast on their website.