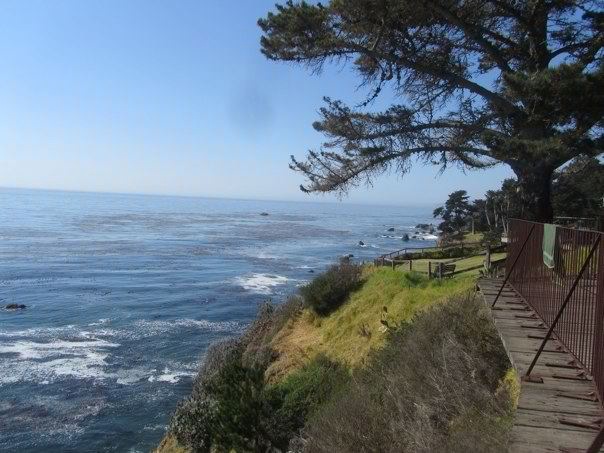 It was in 1972 when I first heard of the Esalen Institute in Big Sur, California. Co-founded by Michael Murphy in 1962 as an alternative education center, Esalen has been the site of studies on human potential and workshops promoting personal transformation. I had spent the summer gallivanting around the state with my brother, and we had wanted to visit but never were able to make the trip. Forty years later, the perfect opportunity presented itself in the form of an invitation from Pam Kramer, president of Integral Transformative Practice International. ITP was celebrating their anniversary at the Esalen Institute, and it was an incredible chance to meet Michael Murphy.

Big Sur is arguably one of the most beautiful places on earth. With its dramatic coastline and pounding surf, the Institute has taken full advantage of its location overlooking the ocean. The soft summer fog and mild winters are ideal for the wide range of plant species that cover the grounds, and walking along the pathways at Esalen you find yourself intimately connected with nature. It is truly breathtaking.

There is a footbridge on the grounds, and those at Esalen are told to look upstream to receive the spiritual energy of the area, and then turn downstream to surrender and release. During my time at Esalen Institute, this practice was a wonderful initiation into my experience at this special place.

2.)    Committing to the Human Potential Movement

My respect for Michael Murphy goes back decades for his work as co-founder of Esalen Institute and author of numerous books on human potential.   Golf in the Kingdom continues to be a popular title today, as well as his intensive research on the untapped potential of our physical bodies called The Future of the Body. He’s convinced we only use a small percentage of our physical potential. He proved that himself by taking up running in his 50s and going on to qualify for the senior Olympics at 53 in the 1500m. His time of 4:35 minutes is a testament to what the body can do if you consciously focus on its potential. Now 82 years old, he was still fit and full of spirit.

The most inspiring aspect of Michael Murphy is his profound sense of commitment to the human potential movement.  It is inspiring to witness such an energetic man pump his fist and say he’s ready to fight for this shift in society away from the old materialistic paradigms. He truly is a rock star of human potential.

3.)  Either You Write Your Own Story, or it will Write You

Presenting alongside Michal Murphy at Esalen was Jeff Kripal, Chair of the Department of Religious Studies at Rice University and author of numerous books, including his research on Esalen Institute and its history, resulting in the book titled Esalen: America and the Religion of No Religion. The overriding theme of the conference was “Authoring Your Own Story,” and Kripal couldn’t have been better suited to talk about this topic. His soft-spoken, Sufi-style storytelling took us on a spiritual journey of how we reinvent and rewrite our own personal stories. At one point he quoted William James, who is probably one of the most brilliant philosophers and forerunners of modern day spiritual thought, and said:

“There are two kinds of people: the once born and the twice born. The twice born are those whose birth world falls apart.”

Kripal explained that our cultural narratives involve people dying all the time. We are born in to a cultural context, a story that society wants to give to us and often as we grow up, that story falls apart. We often times find that the old paradigms forming these narratives just don’t work with our modern day perspective. Once your story falls apart, you have to be born again into a new story. That is the story you envision for yourself and begin to rewrite. As Kripal said, “Either you write your own story or it will be written for you.” He urged us to look inside and discover our true story and begin writing this new version.

On Saturday afternoon, we had a three hour break between workshop ITP sessions. Pam Kramer, president of ITP International and responsible for organizing the entire event, showed a great sense of spirit, grace and generosity and offered to show Laura and I around the grounds during her precious free time. Having spent many occasions at Esalen, Pam was extremely familiar with the grounds of the Institute and walked us from the newly refurbished hot tubs at the south end of the property, to the meadows and meditation center. She led us on a walk down to the rocky beach, back up past the George Leonard pavilion to the vegetable and flower gardens and finally to a secret little lookout on the north end of the property where we sat together and took in the scenery. Pam’s indefatigable energy and pure spirit are a source of connection and inspiration to everyone she meets. I greatly admire the work she is doing with the ITP community, her leadership and her ability to recognize the talents in others.  As a result of her very kind offer to guide us around the grounds, we got to experience the secret corners and passageways of Esalen as she shared her own stories and personal observations, bringing the Institute to life.

5.) Connecting with a Spiritual Community

The workshop at Esalen Institute was attended by approximately 60 ITP International members, celebrating their 20th anniversary of ITP. It was so encouraging and energizing to meet spiritual seekers from around the country, coming together in a common practice and with the common goal of reaching the highest potential. I’ve been to a lot of seminars, conferences and spiritual workshops over the years and I always felt a certain reluctance to be part of the group, where in this case, there was none of that feeling. I think the sincerity of intentions was so profound there was little or no room for extraneous thought or distracting sensations. Discussions and work sessions stayed concentrated on the theme of self-discovery, and it was a joy to meet so many individuals. Sharing in the moving mediation of the Kata was a transformative experience in itself, and ITP Bob Doenges’ poetic invocation to George Leonard concluded by saying that with our work together in the spirit of human potential, we have achieved success and now we are moving on from success to significance.  Sharing these days with so many sincere spiritual seekers as the ITP members was indeed a significant story.

6.) Take the Time to Slow Down

At the far south end of the Esalen Institute there are refurbished hot tubs built at the very edge of the cliffs utilizing the natural hot springs flowing out of the mountain and flowing into pools at 117 degrees Fahrenheit. It was invigorating and relaxing to sit in the warm mineral baths under the starlit sky after a long day of sessions and listen to the surf swishing on the rocks below. Somehow, leaning back in the water, floating, losing the sensation of our body in space and time and listening to nothing more than the gurgling and frothing surf, opens the inner mind.

On the final day of the workshop we started a meditation in which we were instructed to be aware of sight and sound. Using the ITP technique of soft eyes to soak in the entire scene during our meditation I became more keenly aware of the shafts and movement of light and the play of color. Concentrating on sound we heard the soft rustle of the ocean waves, the chirp of birds, buzzing of bees and the occasional croon of a sea lion. Using those sights and sounds, we were asked to fuse them into a third sensation of assessing our inner state of consciousness. Using these sights and sounds to keep thought and personal experience out of the mind, we were able to have a direct relationship with consciousness itself.

We were then told to take a stroll around the grounds and take a random walk holding on to this meditative state. I strolled up to the hilltop on the far end of the grounds overlooking the gardens and was just amazed at the rich, psychedelic splendor of the plants, vegetables and flowers. If there ever was a Garden of Eden, it couldn’t have been much better than the garden of Esalen. There I flourished in a mindful meditation, enjoying my own experience of oneness with the now, and was able to obtain the natural high of ecstasy at Esalen.

What ways do you find the ecstasy of everyday life?